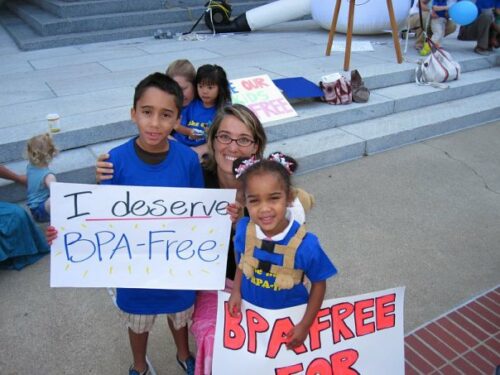 On two Wednesdays in August, in two California cities, I was joined by hundreds of mothers from backgrounds as varied and diverse as their children’s faces. They all share a common goal; to give the babies in their arms and the toddlers at their sides the healthiest possible start in life. Many of them have known for some time, others are just beginning to learn of the danger leaching out of their baby’s bottle and sippy cup. All of them are urging California lawmakers to ban bisphenol-A (BPA) from feeding products designed for children three and under.

BPA is an artificial hormone that is widely used in plastic bottles and the lining of formula cans. It seeps out of containers and into food and drink consumed by babies and young children.

More than 220 peer-reviewed studies have linked BPA to a host of health problems including breast cancer, infertility, obesity and neurological and behavioral changes, including autism and hyperactivity.

Because BPA is an endocrine disrupting chemical and acts like estrogen in the body, its repeated ingestion is the equivalent of giving babies daily low-level doses of birth control pills. Why would we continue to allow this toxin to poison California children?

My SB 797 would, in conjunction with the Green Chemistry Initiative, ban the use of BPA in food and drink containers for children three years and younger. A final vote on the bill will take place on the Assembly floor before the legislative session ends on September 11.

During a toxic bottle swap in downtown Los Angeles on August 19, and a “message in a bottle” rally at the Capitol on August 26, parents urged California lawmakers to support SB 797 and protect our children from further harm.

We are already lagging behind. Minnesota and Connecticut both enacted bans on BPA with bi-partisan support. Canada has banned the chemical from baby bottles. U.S. Senator Dianne Feinstein is pursuing legislation at the federal level. Public health officials in Massachusetts are warning parents of young children to avoid BPA.

Toxics in Our Lives

The Fight to ban harmful pesticide in California – Chlorpyrifos

California, one of the nation’s largest agricultural states, announced plans Wednesday to ban the widely used pesticide chlorpyrifos is inked to neurological problems in infants and children even as federal regulators have allowed the product to remain on the market. State health officials said their decision came amid growing evidence that the pesticide, which is used on crops such as oranges, grapes and almonds, “causes serious health effects in children and other sensitive populations at lower levels of exposure than previously understood.”[...] Read more »